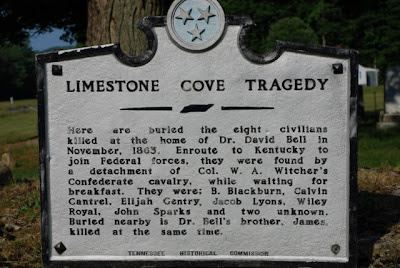 A historical marker in Unicoi County marks the site of a bloody incident that speaks volumes about the impact of the Civil War on upper east Tennessee. It's easy to assume that since Tennessee was among the eleven Confederate States that all residents of Tennessee at that time supported secession and the Confederate cause. But the history of this region is much more complicated that simply drawing a line north and south. My first recognition of this came when I was still living in Illinois ("The Land of Lincoln") and read about a small college called Lincoln Memorial University in Harrogate, TN. Strange, I thought, a college in the South named for the Great Emancipator. Upon moving to to east Tennessee, I found it fascinating that most cities in the area had a "Union Street" and a "Lincoln Street." When I asked local folks about this, they said that east Tennessee was pro-Union during the war. And while that is true, it's also an over generalization.

One hundred and forty five years ago, the Limestone Cove Massacre occurred in what is now Unicoi County (it was created from parts of Washington and Carter Counties in 1875). The site of the massacre was the Bell house, which originally stood across the road from the Bell Cemetery. A 1903 book entitled History of the Thirteenth Regiment, Tennessee Volunteer Cavalry describes the incident in all its gory detail. The Bell family is said to have been well known and respected in Carter County. Yet neighbors led the Confederate troops to this home of Union sympathizers -- and upon finding a house full of men enroute to join the ranks of the Union army, the Confederate troops killed the men and burned down the house. The roadside historical marker at Bell Cemetery gives a brief account...

Limestone Cove Tragedy
Here are buried the eight civilians killed at the home of Dr. David Bell in Nov 1863. Enroute to Kentucky to join Federal Forces, they were found by a detachment of Col. W. A. Witcher’s Confederate Cavalry, while waiting for breakfast. They were: B. Blackburn, Calvin Cantrel, Elijah Gentry, Jacob Lyons, Wiley Royal, John Sparks and two unknown. Buried nearby is Dr. Bell's brother, James killed at the same time.