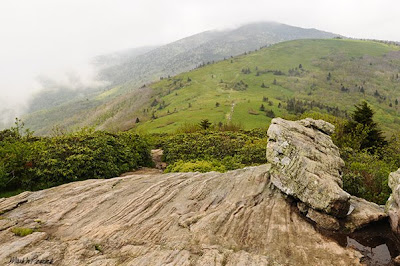 In the morning a man walks with his whole body; in the evening, only with his legs.
--Henry David Thoreau (1817-1862) American Essayist, Poet and Philosopher

I'm always struck by the love and affection people in this area have for Roan Mountain. I often hear people say that they're "going up to visit the Roan." As if they're setting out to see an old friend. And indeed they are. As I was setting up the map of all the area hikes and waterfalls I've discovered, I realized that the Roan was literally at the center of all of my Appalachian experiences.

As you start up Round Bald from Carver's Gap, you encounter a dense conifer forest with an other-worldly quality to it. It's like a scene out of The Hobbit - there's something mystical about this short section of the Appalachian Trail. I've heard some people say they think it's spooky, as if a thousand eyes were secretly watching. I actually find it to be a very peaceful, serene place. Even if the winds are whipping on the balds above, the woods are usually calm and quiet. Often there's a mist that settles in, casting a soft glow over the landscape. Soon you emerge on the top of Round Bald - beautiful views in all directions.

The top photo is of Round Bald as seen from near the top of Jane Bald which is the next bald you'll encounter on the AT. For those unfamiliar, the term 'bald' refers to a treeless area -- either a grassy mountaintop or a 'heath bald' covered with shrubs (usually rhododendron, mountain laurel, azaleas and blueberry bushes). Round bald is of the grassy variety; Jane Bald is in danger of becoming more of a heath bald. There's much debate as to how these mountaintops became 'bald' - it's not because of elevation (The only portion of the Appalachian Trail above the treeline is in the White Mountains of New Hampshire). Some blame severe forest fires, others say overgrazing of elk, bison and buffalo caused them. Whatever their origin, these wonderful balds provide stunning panoramic views! Recently, an effort has been made to retain the grassy character of 79 acres between Jane Bald and Grassy Ridge by introducing 34 blueberry bush-eating angora goats to the highlands (in fenced sections). The goal is to preserve what has been described as the longest stretch of grassy balds in the Southern Appalachians. My previous post here. Here's a video and article describing the project; and here's another video of them moving the goats to a new section of pasture.

Soon after Jane Bald, the trail splits, with the AT continuing on to the left and a well-marked side trail heading up to Grassy Ridge to the right. With an elevation of 6,189 feet, Grassy Ridge Bald is one of the highest balds in the Appalachian Mountains. The total distance of the hike from Carver's Gap to Grassy Ridge is 5.1 (roundtrip). To get different perspectives and see additional photos of this beautiful hike from others click here and here.

Directions: Take Route 19E to the town of Roan Mountain, turn onto Route 143 and travel 12.8 miles to the TN/NC state line (Carver's Gap). On your way up the mountain, you'll pass through the Roan Mountain State Park. Eventually, you leave the state park and enter the national forest. Park at Carver's Gap, cross the road to your left, and you'll begin your ascent to the Balds on the Appalachian Trail.

For more things to see and do on Roan Mountain, click here.  For a google map of the area, click here.