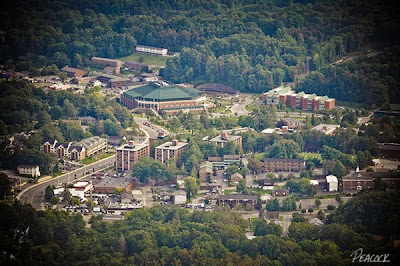 Ventured into the High Country of North Carolina last weekend -- and did the tourist thing. Took in the sights on the Blue Ridge Parkway, did some shopping at the Outlet Mall outside of Blowing Rock, then enjoyed the view from Howard's Knob and finally had a delicious dinner at Black Cat Burrito in Boone.

Howard's Knob (elevation 4,406 feet) offers "unparalleled views" of Boone and Appalachian State University. It was hazy the day we were there, so I had to

push the contrast, blacks and recovery within Lightroom to pull out some of the detail of these photos of the Appy State campus and Kidd Brewer Stadium. Howard's Knob was named for an early settler to the area, Benjamin Howard, a British loyalist and contemporary of Daniel Boone. In 1979, the world's largest windmill was constructed there, but this experiment was short lived -- it seemed it was also the world's noisiest windmill. The turbine was dismantled in 1983 and the area turned into a park.

Directions: From 421 (E. King St.) turn north onto Grand Blvd and travel 0.2 miles, turn left on Bear Trail (one way) and drive another 0.2 miles, then turn left on Eastview Dr./E. Junaluska Rd. (listed as both on Google Maps) continue following this insanely steep road up the mountain for 0.85 miles, you'll then turn right onto Howard's Knob Road and drive 1/2 mile to the park located at the end of this road. The one-way road goes through the park goes counter-clockwise. The parking area for the overlook is located next to an open meadow -- a short walk will lead to the overlook.